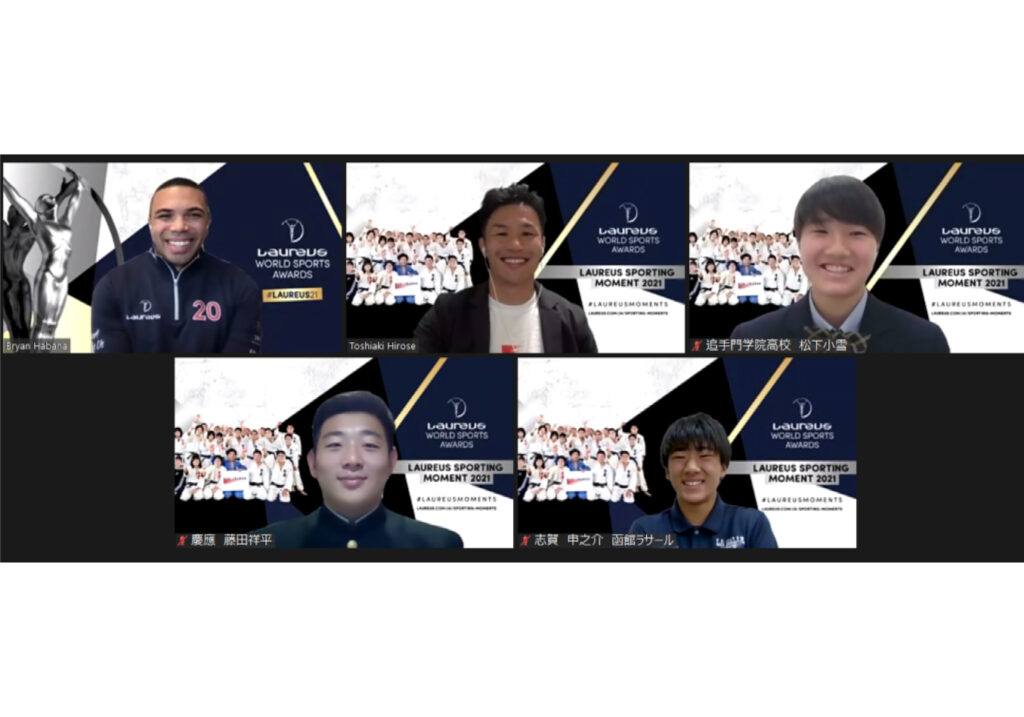 The two discussed memories from their rugby careers, the rugby community’s issues, advocation of social progress through sports, and activism by athletes.

Questions from the Students

What is important to you in your life? (Koyuki Matsushita: Otemon Gakuin Senior High School)

Staying positive—whatever your situation was yesterday, to think that it is a new day when you wake up. By being positive, I believe others around me, the people I talk to, become positive. So, I would like people to remind themselves to be positive when they wake up.

What do you think about ordinary life being lost due to the pandemic? (Kounosuke Shiga: Hakodate La Salle Senior High School)

Maybe, some people had to give up their dreams of becoming a professional sports player due to the pandemic.

The Tokyo Olympics have been postponed for a year. Some athletes had their competitions cancelled, which they had been training hard to compete in.

I think the pandemic taught us to adapt and prepare ourselves for change constantly.

I feel sorry for those who lost their chances, but people who can adapt to change are the ones who are thriving despite the pandemic.

I think you cannot meet your teammates as much as you want due to the pandemic, but how do you usually interact with your teammates? (Shohei Fujita: Keio Senior High School)

There is a principle I was taught when I was young. That is to respect others if you want to be respected by them. Sometimes, you might feel that people are not respecting you. But just as it is essential to wake up feeling positive, it is important to respect yourself.

As a professional player, I know how hard people train and how difficult that is. That is why I respect others and why it is important to respect others, regardless of their age.

The great thing about rugby is that it is a sport that anyone could play, regardless of their height or speed. Different types of people with different strengths all play together for the same goal; that is the wonder of rugby. People working together for the same purpose leads to success. I might even say it promises success. That is what I love about rugby. By sharing a sense of solidarity, we build friendships that extend way beyond the lockers and the pitch.

Co-Representative Director Hirose commented on the spread of the #Never Stop Playing Sports movement during the event. “I was thrilled to know that people around the world were interested in the movement, especially because our movement only focused on the Japanese domestic community”. Bryan Habana replied:

I think “what #Never Stop Playing Sports is doing is terrific; it teaches people lessons that are not only useful in sports but could be used as a guide throughout life. It is vital to help people focus on sports and supporting young athletes in advancing their careers.

I am part of a similar initiative, so I also understand how difficult this is. We are all facing difficulties now, but the platform #Never Stop Playing Sports has created should become a powerful tool in combatting this challenge.

The event ended with the two former players discussing what athletes and sports could do to impact the world positively and what powers sports had to change society.

Public voting on the Laureus Sporting Moment Award is ongoing. The award is the only award within the Laureus World Sports Award that is decided by votes from sports fans all around the world.

Bryan Habana is a rugby legend. Scoring a record 15 tries during the Rugby World Cups, he is one of the best try scorers in the world.

In the 2007 Rugby World Cups, he scored eight tries throughout the tournament leading his team to win the Webb Ellis Cup. He was chosen as the Most Valuable Player of the year by World Rugby (as the International Rugby Board then). He retired from professional rugby in 2018.

Bryan became a Laureus Ambassador in 2009 and joined programmes all over the world for over a decade, promoting the institution’s mission and fundraising for programmes.

In 2020, he became a member of the Laureus World Sports Academy, joining a legion of sporting legends and stars worldwide.